Resources
Should I move my investments into "safety"?

The other day I received a call from one of our clients – we’ve gotten a few of these – asking about, in this time of upheaval, whether she should move her investments into something “safe” like a money market account.

Her brother did this in January – and was happy to let her know this week that his investments haven’t gone down as a result.

This question, to my mind, is an easy one: No.

I mean, I get where she’s coming from. It might sound like it makes sense – to shield herself from future losses. But here’s the problem: it ignores the upside.

In our previous post we had a chart of all the market returns of the past 50 years. The key takeaway from that: markets spend way more time going up than they do going down. They’ve consistently dropped quickly, then rebounded back to growth and stayed there for a much longer time.

In short, if this client was to move her money out of “growth potential” into what she feels is “safety”, she would be missing out on the gains that can come after a crash.

Mackenzie Investments analyzed the returns that markets have seen in market lows going back seventy years. This chart shows the lowest date on the market, and then where markets returned to from that point one year later and two years later. These are the gains that her brother will miss out on – and that she would if she moved. 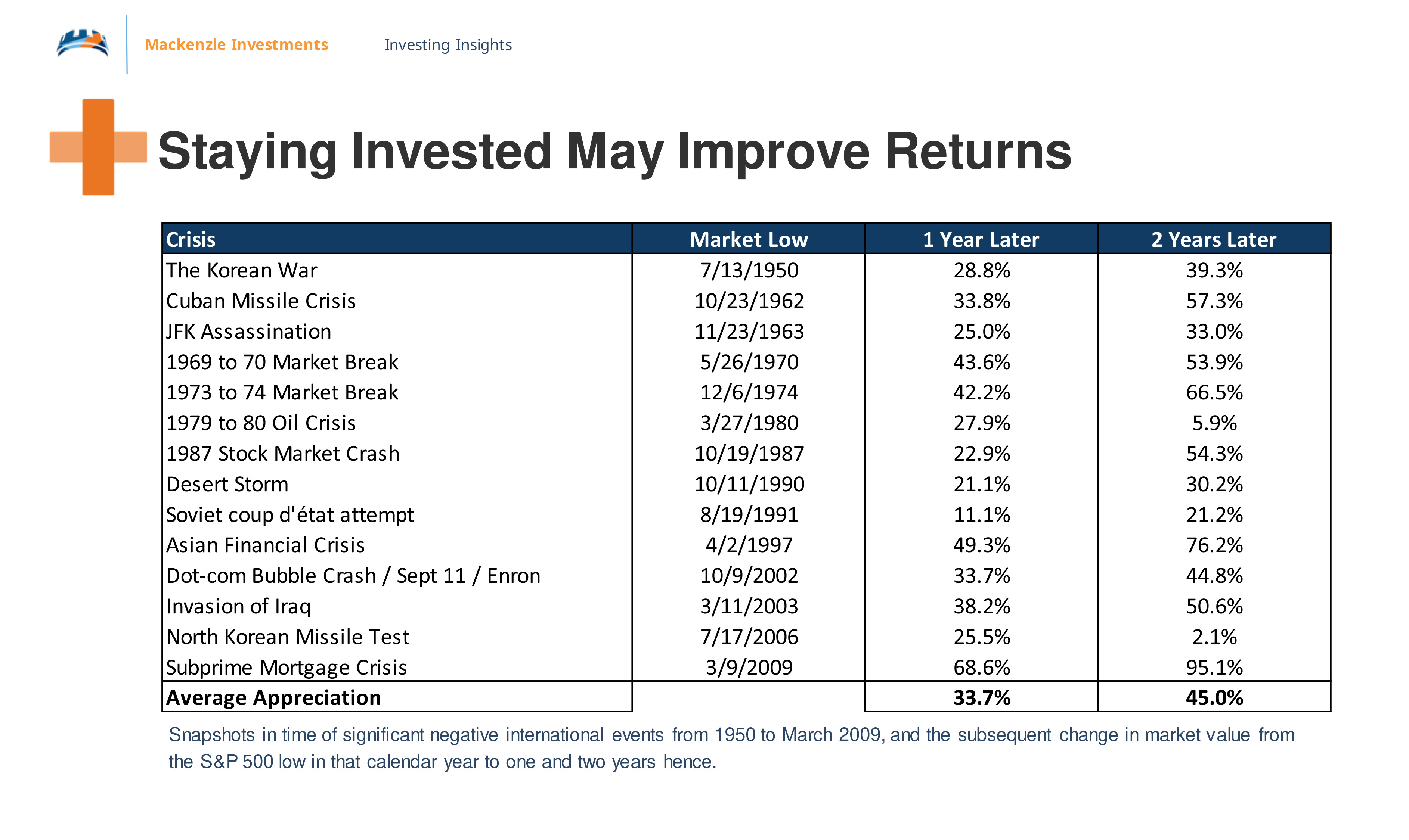 Manulife Investments did the same thing, but including longer-term performance on those returns: 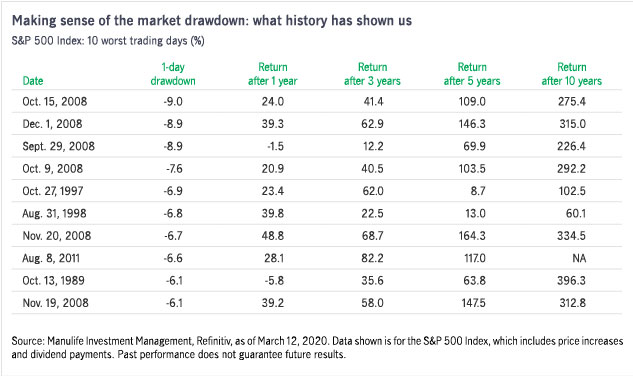 The big thing we’ve consistently seen is that you never know when those returns are going to happen. There is no way to move your money into a money market account now and know that you’ll move it back in time to take advantage of those gains.

To illustrate this, Ian Tam is a CFA who did an analysis for the investment ratings site Morningstar – he found that even taking out the two best days of the past four decades – not months, or weeks, days --would have a significant impact over time. An investment made in 1977 could be worth 19% less if it missed just those two days. His takeaway? If you’re already invested, it’s crucial to stay invested. (Details on his study are at the end.) 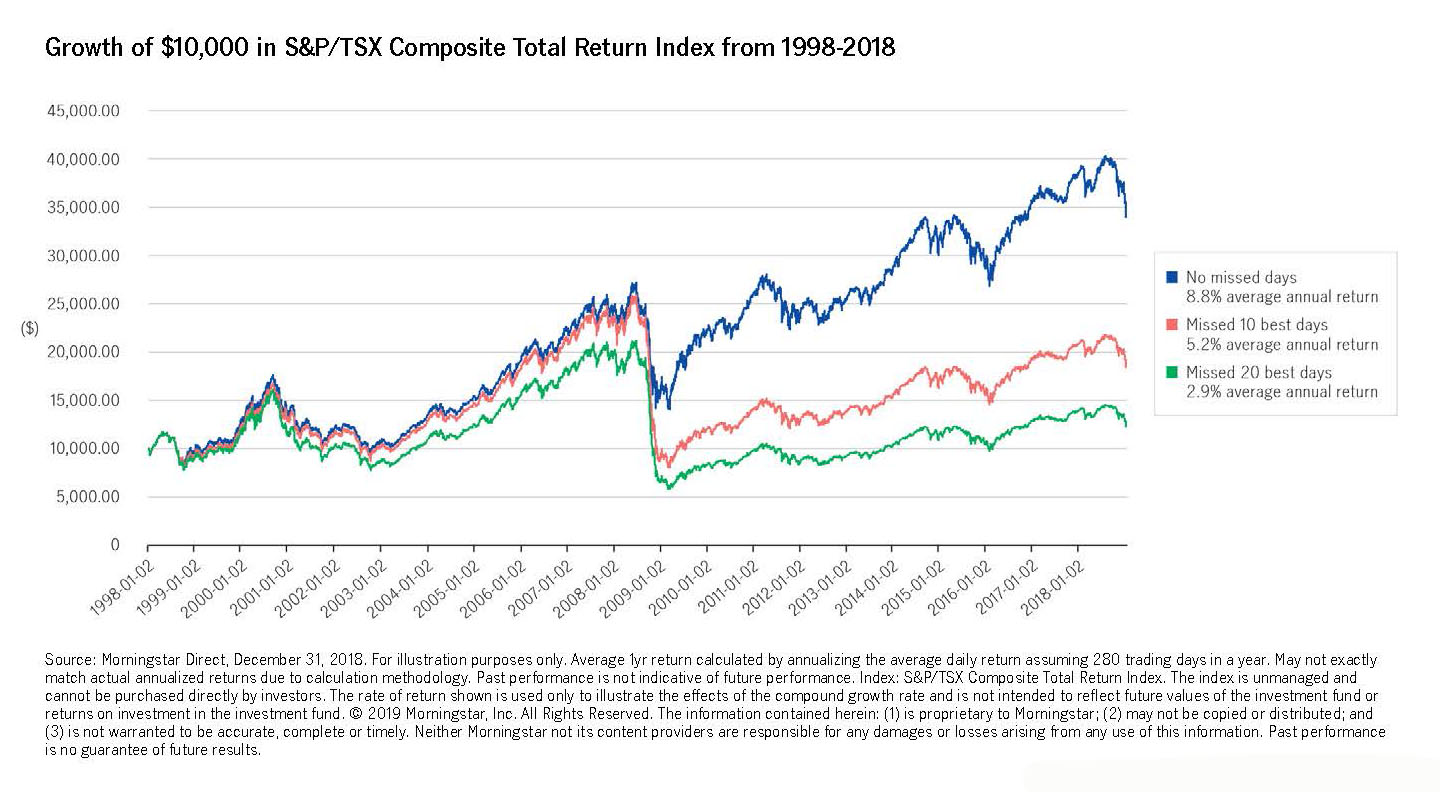 Fidelity Investments – the company that manages our default Fidelity ClearPath funds, took this one step further. You’ll see their whole COVID-19 bulletin below, but look at the difference between staying invested over the past 33 years and missing the best days of the market: 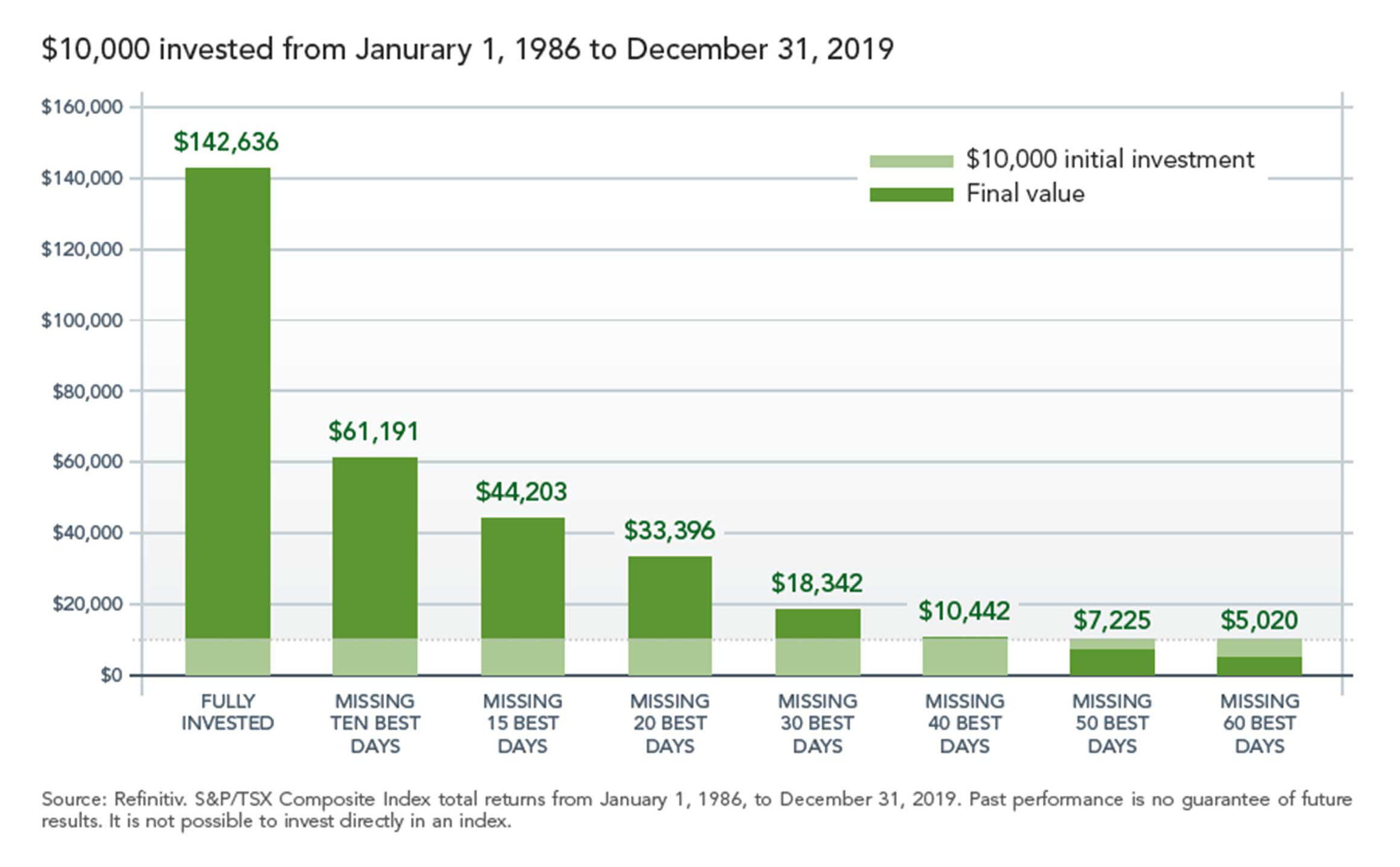 Here is the thing about those “best days”: you never know when they will come. We’ve consistently seen people who decided to wait for those days, and by the time they felt they were coming, they’d already passed. The lesson: be patient and stay invested in things that have the potential to grow.

I talk about this in our Financial Wellness sessions. This one is a bit of a hard one for some people to wrap their heads around: You have not yet lost money. It’s hard to process because it’s right there on their statement. They see a minus. We haven’t seen a minus on most statements for the past ten years. But here’s the thing: as long as you stay invested, you haven’t lost money. You still own the same parts of the same companies. They’re just worth a bit less right now.

The only way that you’ll actually lose money is if you crystallize your losses: if you withdraw your money or move it from where it is now to what you perceive as “safety”. If you do those things, you’ll sell out at the lowest point in the market. Only at that point will you actually have lost money.

To put it another way, let’s say you have a house. One year, the City comes by and gives you your notice of assessment, and they say it’s worth $250,000. The next year, they come by and say it’s now worth $200,000. But you’re still living in the house, and you have no plans to move any time soon. Have you lost money? No. You still have the house. And you’re probably still increasing your ownership of that house.
If you sell it now because the City said it’s worth less, will you have lost money? Well, you’d get less than you would have at the peak – although in many cases the value will probably be higher than when you bought it.
Now let’s say you wait another five years and now it’s gone back up to $350,000. Does the $200,000 value from the past matter? It doesn’t – because you stayed invested.

I know there has been a lot of change facing everyone lately, but we are here to support you – and that first step is doing our best to keep you informed about what is going on in the world.

If you have any questions, please feel free to reach out to our team, or find more information on our site - capitalplanning.ca

From Fidelity Investments – managers of our default investment in the Group RRSP, the Fidelity ClearPath series of investments. Staying investing during the Coronavirus market dip

From GLC Asset Management – the Canadian asset management subsidiary of Canada Life (our pension fund administrator), and manager of funds including our Portfolio Funds:
What should investors do? Five ways to keep your investment plans healthy right now.

From Ian Tam, CFA on Morningstar
If you are already invested, and you happen to pull out before the best day, you’re going to lose to the index, in many cases substantially. The earlier in the year that best day happens to be, the more you will under perform largely because of daily compounding.
To mirror the situation that many investors are in today, I thought to run a similar analysis layering on the effect of compounding over a longer period of time, but this time assuming an investor only missed two of the best days over the last four decades: October 21st, 1987 (the day after Black Monday) and October 14th, 2008 (the day after the index lost 5.6%). These are both days that many investors may have thought to tap out, eerily similar to what some may be feeling today. 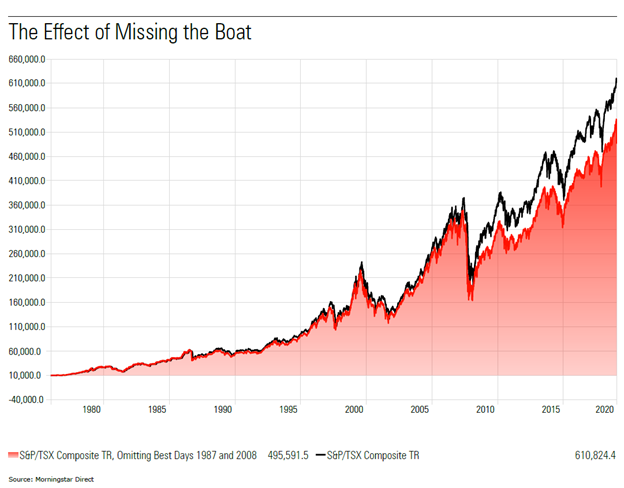 Assuming theoretical investment of $10,000 in 1977, your investment value at the peak of the market before COVID-19 would have been roughly $610,000. But if you missed the two best days in 1987 and in 2008, your portfolio would have been worth roughly $495,000. That's $115,000 (or about 19%) less than you would have made, had you been invested for those two days. That’s a significant sum for missing two days of market action - enough to put a couple of kids through undergrad.
The pain of a falling market is real, and we can all feel it. This said, the long-term pain of missing a day of investment returns won’t likely be felt until years later, especially if that day happens to be a big one. Obviously, no one knows when that day is going to occur, but the only way to ensure you catch it is to be invested.

Your questions answered right here! Connect with an expert

Using your TFSA as a life jacket

Why should you invest in a TFSA now?